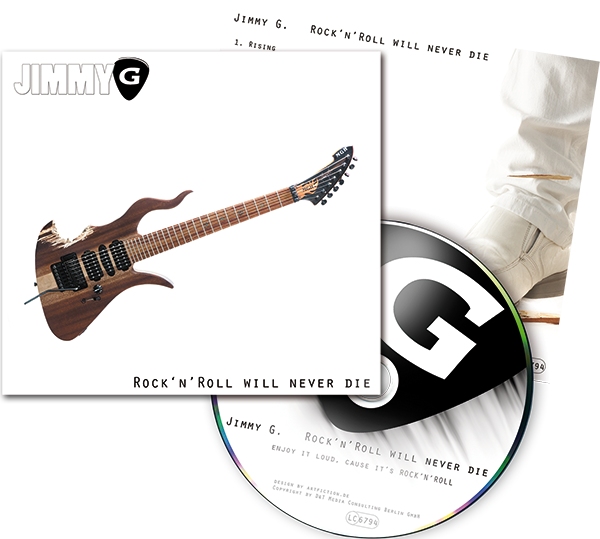 Why? Because good ol‘ classic rock music is too great!

In 2011, we decided to record our first album. Jimmy Gee showed up for the band rehearsal with about 70-80 songs which needed to be reduced down to 17 that would finally go on the album. We began by playing and recording them over and over in order to decide on the best ones. It was a lot of hard work. Our producer Thomas Diehl (R.I.P.) also had a his work cut out for him because Jimmy is a creative musician who is inspired by all types of music. He doesn’t believe in limiting himself.
When questioned about his favorite music style, Jimmy answered, ”I like them all, it’s not about the style, but the message of the song.“

But can someone make an album with 3-4 different styles of rock on it? Every record company would have called us insane but are we normal at all? No! So Thomas said, “We’ll do it our way.“
From epic hymns like Destiny, A New Beginning and Join Me, to rock ballads like Fly With The Angels, classic rock titles Colder Than Ice and the country rock song Enjoy Your Life, as well as heavy rock songs like She’s Got The Money, Give Me Your Force, to the movie soundtrack Symphony Of Broken Hearts, there is truly a variety of great music here.

At first we weren’t sure that people would like such a mixture of styles on one album, but we were quickly proved wrong. It was so popular that there are only a few copies left. With Rock ’n‘ Roll will never die Jimmy fulfilled his dream and was asked by Ex-Yngwie-Malmsteen singer Göran Edman to sing a song with him.
You can find a German CD review on Rocktimes.de.

This website uses cookies to improve your experience while you navigate through the website. Out of these, the cookies that are categorized as necessary are stored on your browser as they are essential for the working of basic functionalities of the website. We also use third-party cookies that help us analyze and understand how you use this website. These cookies will be stored in your browser only with your consent. You also have the option to opt-out of these cookies. But opting out of some of these cookies may affect your browsing experience.
Notwendige immer aktiv

Any cookies that may not be particularly necessary for the website to function and is used specifically to collect user personal data via analytics, ads, other embedded contents are termed as non-necessary cookies. It is mandatory to procure user consent prior to running these cookies on your website.